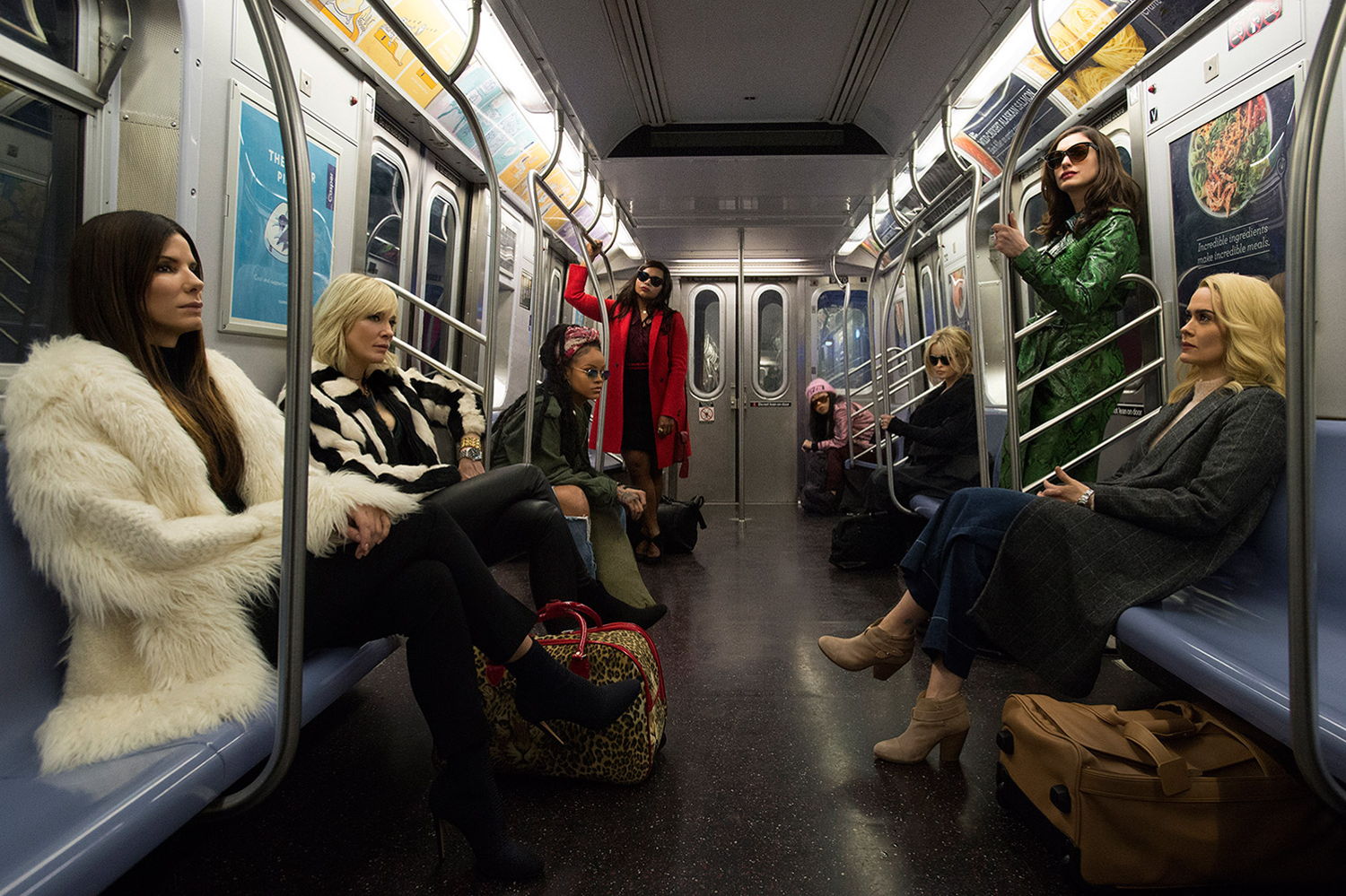 As a woman, there’s something exhilarating about watching movies like “Ocean’s Eleven,” “Reservoir Dogs,” and “Goodfellas.” I’m tempted to call it a “masculine energy” — as if the presence of men adds an exciting sensation to each scene, a stoic terseness that’s achieved only by an excess of testosterone — but really, it’s the complete absence of female characters that draws me closer. My gaze into the “boys’ club,” where women are discussed in an uncouth manner and guns perform all of the emotional labor, feels like an enthralling invasion of a space that was never intended to welcome me. It’s as if I’m pulling off a heist of my own.

Perhaps that’s why “Ocean’s 8,” Gary Ross’s all-female spin-off of Steven Soderbergh’s beloved “Ocean’s” series, falls so flat. Or perhaps it’s that the plot is a basic skeleton of its predecessors: Debbie Ocean (Sandra Bullock), the sister of Danny Ocean (played by George Clooney in the original “Ocean’s” films), is released from jail after a five-year stint, where she spent most of her time plotting the ultimate swindle — stealing the Toussaint, a $150 million Cartier necklace, during the annual Met Gala. And, just like her brother in “Ocean’s Eleven,” Debbie assembles a team to help her successfully pull off the heist. Only this time, they’re all women.

There’s her best friend and partner-in-crime, Lou (Cate Blanchett); Rose (Helena Bonham Carter), a has-been designer; Tammy (Sarah Paulson), a suburban homemaker who also fences stolen goods; Constance (Awkwafina), a skilled pickpocket; Amita (Mindy Kaling), a jeweler; and Nine Ball (Rihanna), a hacker who can crack almost any security system. The eighth woman in Debbie’s ragtag group of criminals is the starlet Daphne Kluger (Anne Hathaway), whose fame unwittingly volunteers her to be the patsy in the plan — she is the bait that convinces Cartier to pull the Toussaint out of its well-guarded vault and into the public.

Although “Ocean’s 8” had potential, with the basic elements that made “Ocean’s Eleven” and its sequels so enjoyable, the film is rife with disappointments and issues that can’t be ignored. Sure, it passes the Bechdel Test — two women converse with one another about something other than men — but Debbie’s entire caper hinges on its ability to frame her ex-lover, Claude (Richard Armitage), as the mastermind, a needless revenge subplot that forces the film into a trite narrative about heartbreak and men. It’s not enough that Debbie’s a world-class criminal with a mind for thievery — no, her entire motivation for the con job has to revolve around Claude, which is not only a worn-out trope that has never done anything particularly positive for women’s representation in movies, but also a little ridiculous. Perhaps contrary to popular belief, women’s lives are not always intertwined with those of men and certainly do not revolve around them.

More than anything, “Ocean’s 8” feels boring . It’s star-studded, flashy, and glamorous, but rarely does a joke land or a performance shine. Gary Ross’s direction is lifeless and cookie-cutter, an odd mix of high-budget set designs and kitschy editing that struggles to strike a balance. Even the technology — eyeglasses that transmit a 3-D image to a remote location, computers capable of hacking into any security software or system, a complex magnetic device used to unlatch the Toussaint — are beyond any criminal’s ability or technical repertoire. The gadgets are so far-fetched they reach into the realm of sci-fi, a strangely heightened reality in which anything is conquerable through the click a mouse. It’s far too easy to be exciting. Even during the heist, a delicate orchestration that relies on certain outcomes, everything proceeds without a hitch. And without the moments of conflict — the heart-racing encounter with the bad guy or the last-minute change of plans — the viewer is left without much to care about.

The stars of the film, namely Sandra Bullock and Cate Blanchett, have argued that the lukewarm reviews of “Ocean’s 8” are indicative of a larger problem: film criticism is a predominantly male industry. While that’s true, their call for more female critics shouldn’t necessarily correlate to a higher aggregate score with regard to female-driven films. Women are not a monolith. We don’t all like the same movies or filmmaking styles, and for Bullock and her co-stars to suggest otherwise is dangerous.

What if “Ocean’s 8” was directed by a woman? Would it have been inherently better? Maybe. Maybe not. Maybe “Ocean’s 8,” at its core, just isn’t that interesting, no matter who’s at its helm or who’s reviewing it. What’s important is that women are given the opportunity to succeed or fail, to make a female-driven blockbuster that crashes and burns or a wildly successful box office hit . “Ocean’s 8” is a positive step toward that true diversity, a promise of more experiences and opportunities for women in all parts of the film industry, even if it is largely a let-down. After all, how many male-driven movies exist in the world that are outrageously flawed?

Share this article
Editors' Picks
Career Lessons from the Fabulous Women of 'The Bold Type'
8 Tips to Help You Navigate the Thanksgiving Dinner Conversation
Questions About the Intersectional F-Word, Answered
More articles ›