Women who remind us all that anything is possible 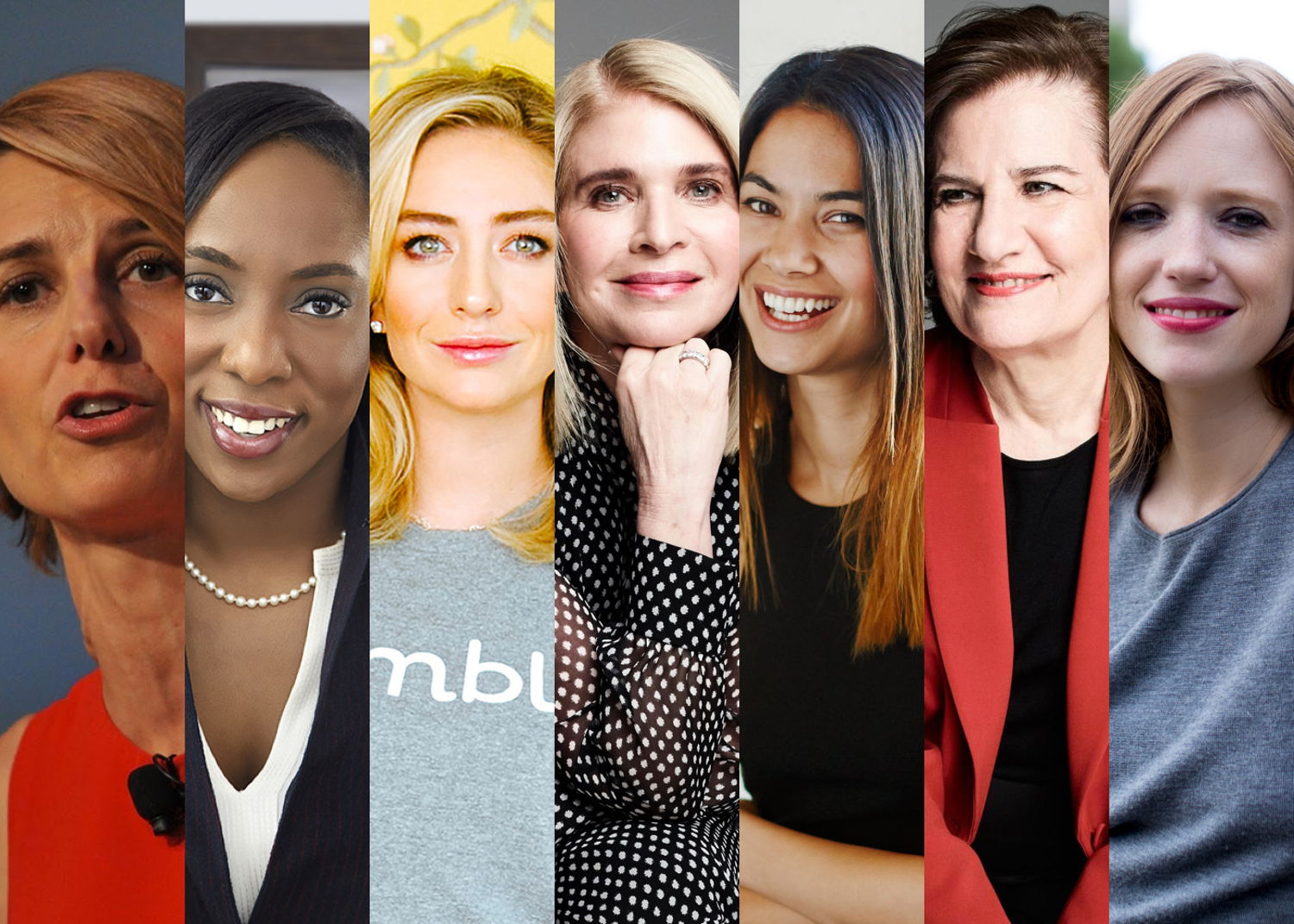 When I was young and people asked me what I wanted to be when I grew up, I told them my aspiration was to open a business where I baked cookies for FBI agents and police officers working at crime scenes. Sure, it’s a little unconventional and out there, but I had big dreams to combine my passions for baking and forensics, and hopefully brighten someone’s day. Although my business is still not a reality, I am inspired daily by women I see in the news who have pursued their dreams, opened their own companies and have sought out to make a difference in the world.

Today, women are starting more companies and holding more leadership positions than ever before. As of January 2017, there are more than 11.6 million women-owned businesses in the United States . In the past two decades, the number of women-owned businesses has grown 114% . There were 32 women CEOs on the 2017 Fortune 500 list — a number that’s small but represents the strides women have made so far and how much progress there’s still to be made. The fight for gender equality in the workplace is far from over, but thanks to sites like InHerSight , it’s now easier to search for female-friendly companies that match specific benefits you’re looking for--like equal opportunities for men and women. The next step in ensuring the number of women-owned business and women CEOs continues to climb is to encourage the next generation of young girls to reach for the stars, pursue their passions and never let gender norms hold them back.

The women CEOs below are truly inspiring. They’ve set an exceptional example of how you can rise to the top and disrupt traditional corporate culture. Young girls everywhere can learn lessons from these women who are absolutely crushing it — even if their dream is to bake cookies at crime scenes.

President and CEO of the Nike Foundation, the Girl Effect

It’s no secret that women are a powerful force in igniting positive change in the world, and Maria Eitel has made it her mission to provide young girls with the resources necessary to ensure they can play an active role in shaping their future. After working for the White House and Microsoft, Eitel joined NIKE, Inc. as the company’s first Vice President of Corporate Responsibility. Six years later, she founded the Nike Foundation with the intention of leveraging the brand’s hunger for innovation and goal to enact positive change around the world by investing in adolescent girls. Through Eitel’s leadership as president and CEO for the past 14 years, the foundation launched their initiative, the Girl Effect, which aims to improve the lives of 250 million adolescent girls in the developing world living below the poverty line. Eitel’s initiative focuses on four key areas of improvement: ending early marriage and delaying first birth, enhancing the health and safety of girls, increasing secondary school completion and the subsequent transition to jobs, and improving access to economic assets. Through Eitel’s ambitious economic and social initiatives, millions of young girls around the world will have the opportunity to follow in her footsteps to change the world for the better.

Founder and CEO of Uncharted Power

Jessica O. Matthews is the perfect example of how age doesn’t define your success. She’s a dual citizen of Nigeria and the United States and graduated with an undergraduate degree from Harvard University in Psychology and Economics and an MBA from Harvard Business School. When she was just 19, she invented the SOCCKET, a soccer ball that could generate power for the developing world. Then at 22, she founded her own company, Uncharted Power, now an award-winning renewable power company that seeks to harness the energy from motion in order to create entire ecosystems of power for communities all over the world. In 2012, former president Barack Obama invited Matthews to the White House to represent small companies for the signing of the America Invents Act. Her list of accolades is impressive, including awards like Fortune’s Most Promising Women Entrepreneurs and Forbes 30 under 30 list, proving that age is just a number and should never be seen as a limitation on what you can achieve.

Founder and CEO of Bumble

Whitney Wolfe is a pioneer in the online dating industry. Prior to founding Bumble, she began her career at Tinder, as the Vice President of Marketing. Following a sexual harassment and discrimination lawsuit, she left the company to originally start a woman-centric app to focus on positivity and building up one another, thinking she was done in the dating app realm. However, after meeting with Andrey Andreev, founder of online dating network Badoo, she decided to create Bumble, another online dating app. But her app had a new premise: women have to reach out first, an unprecedented move in the dating app sphere. Giving women the power of making the first move was not only groundbreaking, it’s proven to be a driver of success--the app currently has over 30 million users. It’s more than just a dating app to Wolfe, the app is constantly evolving and now includes a function to allow users to make professional connections.

Martha Hoover has built a successful restaurant empire with the goal of improving the lives of women, children and marginalized individuals. Although her background was in sex crimes prosecution, her lifelong love for food led her to open her first restaurant, Cafe Patachou, in 1989 in Indianapolis. 30 years later, Cafe Patachou has evolved into Patachou Inc., a female-led company that operates a collection of several restaurants. Hoover has established herself as a powerful entrepreneur, advocating for quality, locally-sourced ingredients, and a company that instills humanitarian values in its employees. In 2013, Hoover founded the Patachou Foundation, a charity with the mission to feed impoverished children in her community. In addition to serving 1,000 meals per week to food-insecure children, she’s also revolutionizing standard company benefits. Outside of the standard company benefits, Hoover has created a financial literacy workshop and an emergency relief fund for her employees. She’s the perfect example of an emotionally intelligent leader ; She’s extremely dedicated to fostering a supportive and hospitable work environment--an initiative that has changed the way we view restaurant industry expectations.

CEO and Co-Founder of Canva

Melanie Perkins is a force to be reckoned with. Like Jessica O. Matthews, Perkins proves that you’re never too young to jumpstart a successful career . A graduate of the University of Western Australia, Perkins is now the Co-Founder and CEO of Canva, an online platform that allows anyone to create unique and professional designs for free. Perkins grew frustrated during her university studies, realizing that learning just the basics of most design platforms could take up to a whole semester. She capitalized on this business opportunity and pitched the idea for Canva at just 19 years old. Now 30, Perkins is one of the youngest female tech CEOs and has grown the startup to $1 billion in the six years since its conception in 2012. Perkins is working to redefine what the stereotypical executive looks like in Silicon Valley, proving that you don’t have to be a white male to be successful. Perkins has revolutionized the world of design while breaking down boundaries and stereotypes along the way.

President and CEO of Girls, Inc.

Judy Vredenburgh has dedicated her career to getting young girls excited about careers in STEM through her leadership of Girls Inc., a nonprofit that encourages girls to be "Strong, Smart, and Bold" through education and advocacy programs. Though Girls Inc. was actually founded in 1864, the nonprofit wasn’t always focused on championing careers in STEM. The organization was founded on the principle of preparing girls to be wives and mothers and went through a dramatic transformation in the 1970s along with the civil rights and women’s rights movements, shifting its focus to women’s health, sexuality, education and employment. After personal experience facing the stigma of women obtaining careers in the STEM field, Vredenburgh became CEO in 2010 and has since broken down social and economic barriers to inspire young girls. She has high hopes for the future, with plans to lobby in Washington and various state capitols to increase access to STEM programs for young girls, minorities and other underrepresented groups.

Founder and CEO of Maven

Katherine Ryder knows that from failure comes great success. Before founding her healthcare app Maven, she had a string of other jobs. Her career began in journalism, working for The New Yorker and then The Economist. While she was working for The Economist, she founded her first business, a travel company in Singapore. However, she was inexperienced in operating a business and her business fell flat. She refused to allow failure to stop her, and transitioned to a career in venture capital. It was at her first venture capitalist firm that Ryder realized that the healthcare market is predominantly female, yet lacks the proper resources and services to support women. Seizing the moment, she created Maven, an app that connects women with healthcare providers over video or private message to reduce appointment wait times and unreliable medical advice on the internet. Her app aims to provide support, resources and education to women in every stage of life. Ryder understands that healthcare is about people and relationships — feeling comfortable with your provider makes all the difference and Maven has improved the quality of and satisfaction with many women’s healthcare through cultivating the right kind of relationships.

Born and raised a Tar Heel, Cara is a culinary aficionado and zealous writer consumed by wanderlust. She's passionate about women's issues and interviewing inspirational women in her community.

The Ceiling Shatters for Alexandria Ocasio-Cortez